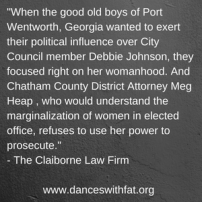 Debbie Johnson is a City Council member in Port Wentworth, Georgia.  She is also a Black, plus size, woman – in fact, she is the first Black woman in the council of all white men. In 2015, during a closed session meeting Ernie Stanhope, another member of the city council, took an upskirt picture of her and shared it around with men including the city attorney and the mayor (who is aptly nicknamed “Pig.”) Then Eric Steely, a political opponent of Ms. Johnson, upped the ante by posting it to Facebook complete with lies and derogatory statements about her. None of the men told her that the picture was being circulated.

The picture went viral and ended up on the front page of the local paper, and on the evening news. That led to a police investigation in which the mayor (who, seriously y’all, goes by “Pig”) chose to obstruct the investigation by refusing to reveal who took the picture. He finally gave up Ernie Stanhope in a follow-up interview. He said “If this does get out, I ain’t gonna be the one that’s gonna be held responsible for it.” Well said, Pig.

Ernie Stanhope sat with his legs wide open and tried to suggest that it was her fault that he took the picture because she was sitting with her legs wide open.

City Attorney Eric Gotwalt brought his own attorney to the proceedings and when asked about the picture requested to take a break. Then it appears he tried to claim that his looking at the picture was an act protected by attorney client privilege.  When asked if we was representing the mayor or the city he responded “I think we represent both.”  He thinks…I’m sure that’s confidence inspiring for both the mayor and the city.

Eric Steely lied about the picture’s origin and then tried to suggest that it was Ms. Johnson’s fault that the picture existed saying: “I could constitute that as a deliberate attempt at public indecency.” Though it’s not clear by what authority he might “constitute” that.

The investigator then asked “What purpose would it serve for her to do that?”

Eric went with the “she was asking for it” defense, claiming “I could sit here and say she has some kind of perverted sexual fantasy and that satisfied it.” Of course that means that Eric’s response to finding out about what he considers to be a sexual predator out there exposing herself is to post an upskirt picture of her to Facebook, captioned with lies and derogatory statements. What a fine upstanding citizen he is.

I’m a black woman that was violated by all white men. What if it had happened to her and it was Black men?  If Black men were violating her? They would be underneath the jail.

I appreciate her pointing out how systemic racism and privilege are at work here. As a Fat Activist I wonder, too, how this might have played out had she not been plus size?

Mayor Pig said ““When I started thinking, I said well again, Miss Johnson being a big woman can’t cross her legs and the picture says it all. ”

This is an example of what we talk about when we talk about intersectionality as coined by Kimberlé Williams Crenshaw. Ms. Johnson is being violated and oppressed by white men at the intersections of being Black, plus-size, and a woman.

She is being represented by The Claiborne Firm, which takes on civil rights cases including, according to their website “cases under the federal civil rights statute after excessive use of force by law enforcement officers and denial of medical care by corrections officers and private contractors.”

Her attorneys are asking for our help:

You can find more information about the case here and in this video:

via Dances With Fat http://ift.tt/2jEvwT0
Posted by Notes From The Fatosphere at 17:23