Last week I had been clearing out my inbox when I came across one from the San Jose Improv and instantly gasped, “Ah! Arsenio!!!” and decided then and there I had I see him perform stand up! So I posted on my Facebook page to see if any local friends wanted to join me. Literally no one! I grew up watching Arsenio Hall in movies and his late night talk show, but I’d never seen him do good old stand up comedy. I had to go.

I talked to some friends at work about it and when I mentioned that I’d go alone, that I wasn’t gonna miss him, I was surprised to hear over and over how others had wanted to do stuff on their own (alone), too, but just couldn’t do it. What?! I know, but I also get it. Like, I get both sides of this. And if I’m being entirely honest, I was a little nervous about it, too. So, when no one wanted to go on Friday I promised myself I’d go on Saturday and have the best time I could, dammit!

While getting dressed that morning I decided to throw on some mascara. I’m a bold lip and nail color kind of gal, but have been experimenting on weekends with some new cosmetic purchases. I had read some reviews and must-lists and was eager to try some new stuff. The one that has really surprised me is this mascara, Maybelline, Lash Discovery (mini brush). You can see the difference between one coat of mascara and none here: 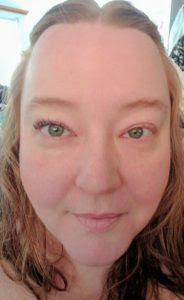 Whoa! I ended up adding a second coat and really liked how it wore. No flaking or smudging, it isn’t waterproof, but I didn’t even notice it was on. I love how much more control I get with the mini brush versus full sized ones. It’s still long, but very skinny and an old style bristle brush. It’s perfect for my barely there lashes. Rock on! I also did my hair different, because why not! I have had the same right sided part forever, so I tried a middle part with some cute pearl bobby pins for fun and just let my hair air dry since it was raining out anyway.

When it was time I headed to downtown San Jose in the rain and wind (it’s nuts this week) and found a spot in a reliable parking garage up the street. As I headed to the venue with my umbrella, everyone I past by stared right at me, like not even trying to hide it. I shrugged it off at first but it soon became weird. At the venue, the line for the box office was stretching down the block. I had to pass by the entire line of people (probably a hundred people at first) to get to the end. I did it, of course, but again, every person in that line stared at me hard! I didn’t get it, I checking to make sure my ass wasn’t hanging out or something in my teeth. Nope. Just assholes. 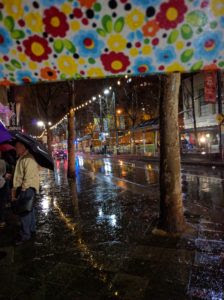 It was a lovely night out if you don’t mind the rain. Everyone in line had umbrellas except for the few who didn’t. They hated the umbrella havers. What can ya do?! The doors were supposed to open at 9:15pm, but didn’t until almost 10pm. I was just glad that it wasn’t too cold out. 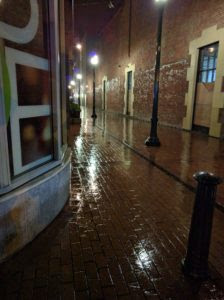 An interesting view from the line once it finally started to move. Trust me, this view is far more satisfying than finding out what is at the end of that alley (it’s super boring, I promise). 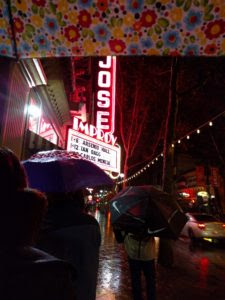 We inched our way up toward the box office and I soon reached the ticket takers and headed inside. Then I was stopped by an usher instructing everyone up the stairs on either side of the lobby. I asked if there was an alternative as my knee was hurting that day. She asked how many were in my party and when I said it was just me she said I could inquire with the usher on the main floor and so I did. He found me a seat instantly. The thing about the Improv is that you have to sit with strangers if your party is less than four people. Obviously I’m one person, so I had to sit with a random couple, surrounded by other random couples.

I did my best not to bother anyone, but it was apparent at first that I was making the original couple at my table a bit uncomfortable. Maybe they didn’t know about the sitting with strangers to fill up the house thing. Maybe geek-beauty and brilliance was just too much for them. Who knows?! But you know you can just tell (I can feel it) when folks start shifting in their seats awkwardly. Meh.

The show was great! Well…okay, the opener was just okay, but Arsenio was great! He was even funnier than I’d ever seen him be on tv! And that’s saying something! There was a two item per person minimum and while everyone around me seemed to be eating nachos and burgers, I stuck with my usual vodka-cran. I laughed my guts out! Luckily I times it just right when he said goodnight and left the stage, I grabbed my stuff and darted for the exit before others got to the aisle.

It was raining even heavier as I walked back to my car, but as I wait for the night to change to cross the street I saw that the local goth club night was at it’s new venue nearby, so I decided to head over there to check it out. Oh sure, actually, that sounds like I was all calm and cool about it but that isn’t the truth. The truth is that I’d wanted to check out their new venue for awhile but had always been too chicken or too tired to actually go. Even as I got to my car and changed my boots I was giving myself a pep talk, “Just check it out. It could be cool! Have a drink, enjoy yourself! Then you can leave. No big deal.” Ha-ha!

I found parking a block away, but the rain was just dousing downtown! I didn’t want to carry my coat and umbrella and my purse. I left the coat and umbrella and grabbed my bag and just went for it! It wasn’t bad going in. The cover was only five bucks and the venue is much nicer than the old one. I grabbed a drink at the bar and headed into the dance area. Only it was much larger than I’d expected and there were really two dance appropriate areas. I chose a convenient dark corner with a bar stool and simply people watched awhile.

I had secretly hoped I’d run into friends, or maybe even meet some new peeps, but that just wasn’t in the cards that night. No biggie. I was thoroughly enjoying myself watching the goth bois dancing. It had me quite transfixed! Their free form and wild movements inspired me. These were not the traditional goth moves, nor music, really. But there was a sense of pure release and freedom in their rhythms that I just had so much love and respect for them. More dudes joined them as the songs changed and for the first time in my goth club going experience there were more guys than gals. I liked this new dynamic as it wasn’t a pick up scene and everyone seemed to keep to themselves. This is what I like most about goth clubs. You can dance wildly and freely on your own and no one questions or molests you. Nice.

A fantastic song came on  and I would have normally jumped up and ran to the dancefloor, but my drink was still quite full and I decided to just chair dance in my dark corner instead. Ha-ha! A bunch of music I wasn’t into came on and I started to think about leaving  but after awhile I grabbed a second drink and attempted to sit in my dark corner again. But dude, it really was dark, as in my attempt I hadn’t realized that it wasn’t my same spot or stool and this one rotated whilst the first one was stationary, thus I narrowly escaped falling upon my giant fat ass in front of everyone there. A few people definitely noticed, but I just refused, for awhile, to turn around from the wall and face them. Ha-ha! Ridiculous!!!

After people watching awhile more it soon became apparent to me that everyone was there in groups of 4-8. There was no mixing or mingling and the few folks there who were solo, didn’t seem to be engaging with anyone around them what so ever. Meh. It was fine. I was perfectly fine watching folks and just taking in the scene, if you will. But my second drink was far too strong! I only took a few sips and ended up leaving soon after. I was almost looking forward to my rainy walk back to my car. That is until I reached the exit and saw the downpour. D’oh! By the time I reached my car I was drenched. Oh well.

I made it home in one piece and no worse for wear, really. I even remembered to snap a couple of selfies! This is rare, y’all! Ha! 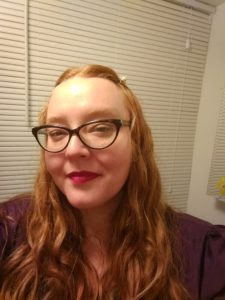 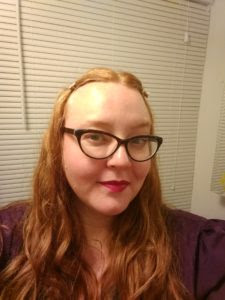 The next morning I realized that I had forgotten to get a pic of my dress…it’s old Eshakti and I love it. 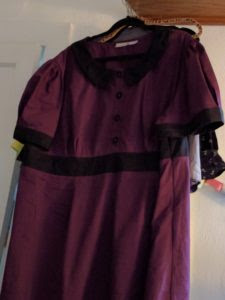 While the evening wasn’t a total blast or a total bust, I was glad that I pushed myself out of my comfort zone and did what I wanted on my own. I was super glad to have finally seen Arsenio and satisfied my curiosity about the new venue for the local goth club. (Though it was definitely not as body positive and queer friendly as Club Bodice in Oakland.) I had a good time and saw things I wouldn’t normally get to. I’d say it was a great night overall. I think I’ll push myself to do more stuff solo and try to make some friends more local to me. Woo! 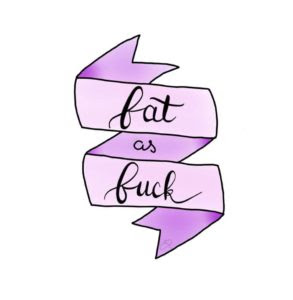 A Facebook friend of mine, Charlotte, made this cool as fuck thingy above, “Fat as fuck” ribbon art. I love it!!! Pretty much how I felt that whole night, too, but in a badass way, ya know?! 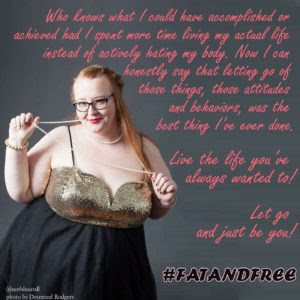 via I'm Not Blue at All http://ift.tt/2iykga6
Posted by Notes From The Fatosphere at 18:59