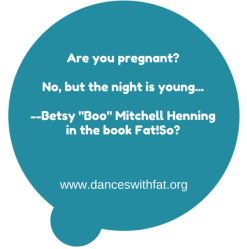 Many fat people have been minding their own business, going about their lives, only to be jolted from their thoughts by someone asking “So, when are you due?”

As has been often said, if you can’t see the baby crowning, don’t assume someone is pregnant. This isn’t just because you have no idea if they are pregnant or fat (and of course there is no shame in being either or both) it’s also because it may be a person who is struggling with fertility, or has just lost a child, or doesn’t want to talk about their pregnancy status with some busybody at the grocery store, or any of dozens of other reasons.  One person’s desire – however well meaning- to make an out loud guess about someone else’s state of pregnancy isn’t more important than the harm they might do.

Reader Rachel asked if I would blog about what to do when you are dealing with someone who doesn’t get those things.   I asked this question on Facebook and, wow, did people respond.  The amazing answers that folks came up with are below (apologies in advance if I missed any.)

I want to point out that not all of the answers will appeal to everybody and that’s fine. Some people might think it’s awesome to say “Yup – twins…Hag and Daz…” while other people might be uncomfortable with the idea of possibly reinforcing stereotypes about fat people and food.

As with everything, your mileage may vary so feel free to pick, choose, and edit for what works for you. Remember that each person gets to choose how to deal with the oppression that comes at them,  so sarcasm, quick wit, and killing them with kindness are all equally valid choices, and you might choose different comebacks for different situations.

If you have other ideas for comebacks to this situation (or if there’s a situation that you would like to see me blog about) by all means leave them in the comments!

My personal favorite response is one that I heard from the always amazing Marilyn Wann “Not yet, but the night is young…”  Marilyn tells me that it was contributed to the FAT!SO? book by Betsy “Boo” Mitchell Henning, a brilliant spirit. According to the FB thread, it is also Hanne and Jasmine’s go to response.

A fun variation on that theme: Diana: “Nah, just fat. Got an IUD to keep from getting pregnant, in fact, wanna see, I can just pull it out for ya?” *makes motion to reach into pants*  This usually freaks people the hell out and they ask why I’d say such a thing, then I respond with “oh, I thought you were totally cool with having intimate medical discussions with strangers since you asked such an invasive question to begin with”

Robin: I tell them my baby is due when theirs is.
Always “I’m not pregnant”
… Ditto

Myrna: A friend of mine had a woman come up and touch her belly and ask when she was due and my friend looked her in the eye and said “stop fucking touching my fat.”

Jami: “Maybe in a couple years” is my go to. The confused look followed by the horror when they realize what I mean & frantic apologies is absolutely priceless.

Margo: “Wow. That was rude. You must be so embarrassed. ”

Grace:  Sometimes they escalate the intrusiveness and ask if I want to lose weight. That’s when I say “Honey, I’m not even done getting fat yet!” Shuts them down quickly.”

Melissa: “I’m fat, and you’re an ass.” I will often ask them in which universe, exactly, they thought asking that was ok or a good idea.

Dorothy, Carly: I tell the truth and say “I can’t have kids.”

Lisa: “No, I just ate a bagel.” Then stare them in the eyes.

Rene: If the question is “when are you due?” I like to start rattling off the due dates of my library books, or when I’m due for my next pap smear.

Tzenah: My response: “For what?” *allow awkward silence to develop*

Elizabeth: “Well, I’m due at work in *checks watch* about 20 minutes.”

Deborah: “I’m due to watch you get super embarrassed in about 20 seconds from now.”

Meghan: I like to ask a question back such as, “When was your last pap or colonoscopy or recital exam? Oh sorry I thought this was inappropriate question time!”

Rene: “Oh thank you kind stranger, I was completely unaware of the joyous occasion. Were you present at the conception? Cuz I sure as hell wasn’t.”

Angie: Set scene: I am holding two screaming babies, both about the same size while pushing a grocery cart with my foot. Woman in checkout line in front of me points at my protruding stomach.
Her: “when are you due?”
Me, “about 13 months ago. I hope today is not the day.”

Brenda:  “Well, I’m not pregnant with a baby, but I always am pregnant with new possibilities in my own life – Life can be so surprising!” I was going for the Zen answer

Deidra:  Depends on how much of an ass they are being and how much of a smartass i’m feeling. “Nope, just fat” is usually the answer. sometimes, “Three hours and i hope to drop that food baby in the toilet later so my pants fit better!” or if they are nasty “I just had a miscarriage at eight months but thanks for asking!”

Caiti:  The only time I had this happen I was really young, but had started developing boobs early. They asked, I very calmly informed her that I was only in pre-puberty and hadn’t even gotten my period yet. She was all shocked and shaken and I informed her that she shouldn’t ask loaded questions if she didn’t expect a response. I walked away after that, but she apparently tried to tell my mom about weight loss strategies.

Andrea: I once feigned stupidity, like I didn’t know what the person was talking about and I kept saying “What?” as if I was confused until they shut up.

Shanna: “No, that is a cupcake and several seitan wings.”

Amy: “This is the size of my stomach; I’m not pregnant.”

Jan: “Yes, I DID just have a baby! Fifteen years ago.”

Janelle: I rub my belly, cackle like a witch and say, “Not pregnant but I do enjoy small children when they’re covered in barbecue sauce!”

Ashley: I want do a whole thing where I act like they’re informing me that I’m pregnant. “What!? I’m pregnant?? Ohmygodohmygodohmygod! My mom is going to be sooooo happy!! But what about my career? I’ll have to quit my job so I don’t work 18 hour days anymore. But my job is my life. I would be miserable. Maybe I should get an abortion. Kids are super expensive so it would be cheaper to pay for an abortion. But what will my husband say??” etc.

Amysue: I’m 55 and just say “no”. It’s not my job to disarm, humor or make someone less uncomfortable for voicing out loud a very personal assumption. That said, when I was younger it was so painful to hear because I wanted to be able to be pregnant and couldn’t. After I became a mom through adoption I’d sometimes agree if it was a stranger because I felt being in the pregnant camp was less “bad” than the fat camp. Now I have no patience with people who are uncomfortable around my body.

Gael: “Yes… and your bastard of a husband hasn’t called me back since I told him.” (contribution from my hubby

Elizabeth: Well if it meant they were offering me a seat on the subway I’d take it and THEN let them know I’m just fat. And not get up.

Amber: It’s usually small children (I’m an elementary school teacher) and I say “nope, I just have a big belly.”

Rain: <utterly delighted tone, rather loudly, a bit wild-eyed> “No, I’m fat as fuck, and I’m so delighted you noticed! <stroking belly curve> Isn’t it gorgeous??”

Beda: Last time it happened a lady, I’ve never seen before in my life, places hand on my belly “you’re having baby?” “Nah, just a lot of pizza”.

LeeAnn: “You know, not everyone with a big tummy is pregnant. People have different kinds of bodies. Why didn’t your parents tell you that?”

Emily: If someone straight out asks whether I’m pregnant, I rub my belly and say with a smile, “Nope that’s all fat”.

One time my fiance’s great niece put her ear to my belly and asked if I had a baby in there. Her mom had just had her baby brother and looked like she was about to scold the little girl for asking such a question. I said “No baby there, sometimes people just have big tummies.” The niece was like “oh, OK” and went on her merry way.

Donna: “Oh am I? Thank you for letting me know”

Mia: As someone who works hard to ensure there will be no babies coming out of me, I respond, “Oh thank god no, I’m fat

Brenda: “This is just leftovers from the last 2 pregnancies…”

Phoebe:  “I’m not, but thank you for the compliment. I must be glowing. Pregnant women are so beautiful.”

Gretchen: “Do you really think so? We keep trying but there have been so many miscarriages!” Then burst into tears. Makes them feel really shitty.

Silva:  “If I’m pregnant, the child will absolutely for sure be the Messiah”

E-K: “My only babies have fur and four legs.”

Amanda: “Only until Thursday, it was the earliest the clinic could get me in.” This wasn’t weird until you made it weird, Sparky.

Katrina: “No. I’m fat. Shit, isn’t THIS embarrassing for you.” Or I (very sincerely) say “Nope. But you obviously are, hey?! So exciting! Wait-let me guess- yooooou’re 6 months? Have you picked any names yet?” And then I go in for a belly rub.

That’s if for now! Again, if you have comebacks for this situation, and/or a situation that you’d like me to blog about, please leave them in the comments!

via Dances With Fat http://ift.tt/2iRnloN
Posted by Notes From The Fatosphere at 07:07